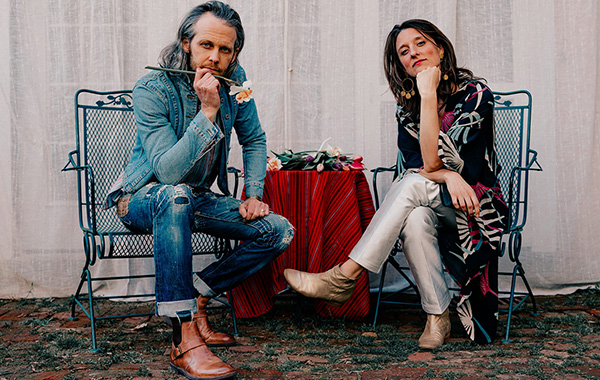 No smoking is permitted on-site.
Pioneering folk musicians David Wax and Suz Slezak are the plucky husband-wife duo behind the eclectic, exuberant “Mexo-Americana” band David Wax Museum, and they'll be back this fall under the tent for a cozy performance on Saturday, October 1.

After 14 relentless years touring the country and world, half of them with their two young children in tow, COVID’s abrupt disruption in March 2020 created a first jarring, then welcome creative pause for the Charlottesville, VA-based band.

Before the pandemic, the ascendant band was enjoying newfound success with their 2019 first label release Line of Light (on Austin’s award-winning Nine Mile Records), subsequent national TV debut on CBS This Morning: Saturday, and three distinct features on NPR’s World Cafe. They built bridges performing at the wedding of Democratic presidential hopeful Pete Buttigieg and his husband Chasten–and then in 2021 their plaintive ballad “Big Sur” debuted a on top rated Netflix show, Firefly Lane. David Wax Museum even had a big new bombastic studio album with their boisterous six-piece band in the can, but then the sudden shutdown temporarily shelved it.

The hard-working pair immediately took to touring the live-stream stages of Facebook/Instagram/YouTube Live and Zoom when all their beloved, well-trod venues, from D.C.’s esteemed 9:30 Club to Philadelphia’s Johnny Brenda’s, shuttered overnight. Such creative constraints laid the groundwork for the band’s most fruitful period ever.